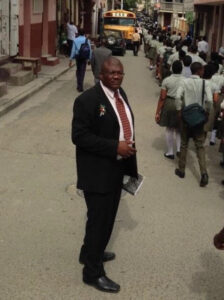 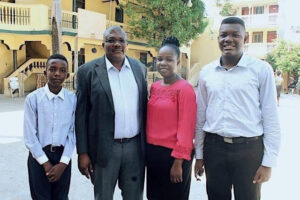 Henoc was the second oldest of nine children born to Rev. Sidoine Lucien and the late Athénienne Anevèque Sériphin Lucien.  Henoc was born on June 3, 1958, in Pignon, Haiti. His family moved to Cap Haitian when Henoc was four years old in order to give him and his siblings a better education than what was available in his hometown of Pignon. Henoc attended College Practique Du Nord from Kindergarten to 11th grade.  He transferred his senior year and graduated from Lycée National Phillipe Guerrier. Through heavenly intervention, God opened doors for Henoc to enter the United States and obtain his bachelor’s degree from Washington Bible College. After college, he moved to Dallas, Texas, and earned his Master’s in Divinity from Dallas Theological Seminary.
Henoc was a visionary whose dreams extended to his parents, siblings, extended family, church family, and community. Through Henoc’s unselfish sacrifices, all of his eight siblings entered the United States to further their education.
In 1994, Henoc answered yes to God’s calling for him to return to Haiti and start a ministry. The vision allowed him to plant churches, build schools, and help those in need in northern Haiti. Henoc’s goal was to transform lives by sharing the gospel and by educating the next generation with a Christian worldview. To accomplish his goal, he had to depend on God and moved by faith despite many obstacles. Henoc founded Vision of Hope Ministries in 1998.
Today, this ministry includes four churches: The Cap Haitian Evangelical, Bérard Evangelical, Grand Rivière du Nord Evangelical, and Hope Church in Bérard. In 2002 the ministry grew to include a school called College Susan Schuenke, a K-12 Christian school with an enrollment of 1200 students. Because of his obedience to follow Christ, God used him to be the hands and feet of Jesus in the life of countless people in Haiti.
In 2008, Pastor Henoc, together with his wife Guerline, rescued 14 children from the Gonaïves flood and started an orphanage in Bérard, Haiti.  Also, in 2010, he built the Bérard solar clean water plant as a way to create sustainable job opportunities in his community. This water plant provides clean water to over 400 families daily. Pastor Henoc was the overseer and keeper of sound doctrine to all those he served for God’s glory.
Henoc was a distinguished member of his family and community. You did not have to be a member of his family or church for him to assist you.  He was a man that loved the Lord and served Him with all of his might despite hardship.  After his relationship with God, his children were his pride and joy.  He made no distinction between his biological and his adopted children; he loved them all.
He was a man of character; he loved a good joke! His laugh was contagious, his love for God was admirable, and he lived his life with purpose. He loved people as they were, with no judgment! He was invested in the work of the Lord, and his leadership and involvement with VOHM and Jerusalem Baptist Mission was unmatched. Some of his last words to his family were, “In life or in death, the name of the Lord is to be praised.”  Even in his death, he encouraged his family to follow Jesus no matter what.  He left a spectacular legacy, and his earthly family is proud to call him their own! He may be in Heaven, but the foundation he lay on this earth will continue.
Henoc was preceded in death by his mother, Athénienne Lucien.  He is survived by his wife, children and grandchildren listed above, His father, Rev. Sidoine Lucien, his siblings Néhémie (Anel) Ossius, Caleb (Debbie) Lucien, Prima Lucien, Jephthe (Widmide) Lucien, Ephranie (Calvin) Chapman, Ephraim (Nandy) Lucien, Sarah (John) Mitial, Rachelle Lucien, and Moise Lucien. He also has many more children and grandchildren through the orphanage. He will also be missed by his church family, many nephews, nieces, cousins, board members, friends, and neighbors.
The family will be having a private ceremony and burial at the Jerusalem Baptist Church in Pignon Haiti on Tuesday, June 16, 2020.  In lieu of flowers, memorial gifts may be made to support Henoc’s work through VOHM.
Vision of Hope Ministries, Inc. (VOHM)
PO Box 238
Lithopolis, Ohio 43136
visionofhopeministries.org
Rest in the arms of the Almighty God, “Papa Fader.” No words can describe the impact you made in this world!